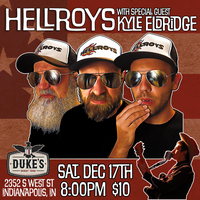 "The Hellroys' 2014 debut album “Dumb Country Noise" quickly established them as a hilarious, twang-banging, must-hear band. The follow-up albums, "HELLROYS Is Real" and "HELLROYS On Earth" put the band in the national spotlight when Sirius XM radio featured "I Don't Do No Drugs,” "Drunken Cornteen Blues" and "Mama Used to Beat My Ass" on the Outlaw Country channel. The Hellroys are currently releasing singles from their upcoming 4th album "HELLROYS Half Acre." Special guest, Kyle Eldridge is a two-time Ameripolitan Award nominee for Best Western-Swing Male. He's also one of the hottest young guitar pickers you've ever seen. Don't miss Kyle and his band, the Kentucky Cowhands, as they open what is sure to be an incredible pre-Christmas show at Duke's Indy! Don't miss this one. Get your tickets today! Tickets - $10 Doors 5pm | Music 8pm